Where were you when history was made? 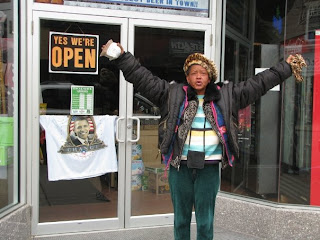 I was working when history was made.

Barack Obama won the 2008 presidenital election and I was covering the story for The Record newspaper. I was in Teaneck, N.J. at Fairleigh Dickinson University talking to students as the results were announced.

Once Barack Obama was named declared the winner my cell phone began buzzing off the hook. I was receiving text message after text message from friends. History was made and everyone was excited to be a part of it.

They say you always remember where you were and what you were when something monumental happens.

So I asked some people to tell me about what they were doing when the result were read.
Here's what they had to say:
Chris Stevens, lives in Great Mills, Maryland:

"I was sitting in my apartment, watching the results come in state by state, and then when he took California, Florida and Ohio, my mom called me and we just kinda cried on the phone for a few minutes.

History was definitely made Tuesday night, proof positive tha if you believe in something strong enough and if you want it bad enough, you can achieve it."

"I was alone on election night, my boyfriend had gone home to Philly to vote. But I kind of wanted to be alone, so i could really be in the moment of the historical night. Once Obama won PA I knew he would win. Barack appeals to all generations and all races. He is exactly what America needs. When he won, I was overjoyed.

The moment that made me cry was when CNN showed Jesse Jackson on screen crying. At that moment I knew he was thinking about that day Dr. Martin Luther King Jr. died and how he wishes he could see this day. I kept crying until after Barack made his speech. I still cry when I think about what all our people have gone through, and what my own parents went through in the time of segregation. I cry for those who got killed for the right to vote, and made it possible for me to have all things I have today.

I will always remember this day. I will tell my children that I voted for the first African-American President so they know they can be anything in this world they want to be. Barack Obama also taught me at 23-years-old that I can be anything too and from Tuesday night I will never let myself believe I can't make my dreams come true."

"I was in Grant Park in Chicago, Illinois watching President Barack Obama give his speech. Words can not say how I felt, what I saw, or what I experienced. It is an emotion that has not been given a name as of yet...it is an overwhelming emotion that I can still not speak on or write about without tears.
I can say however, that I came out proud of this nation as a whole!!!!! I have never been prouder to be an AFRICAN-AMERICAN FEMALE...and prior to this event I would just use the title black, but I have embraced American to the most honorable extent now! I love our country, I love this nation, and I love President Barack Obama, Michelle, Malia, and Sasha as well!!!"
Posted by M Feenz at 12:48 AM